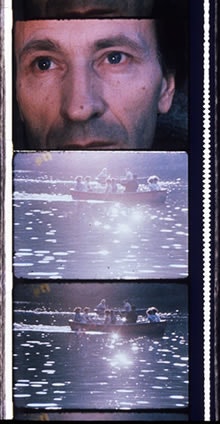 “Of course, what I faced was the old problem of all artists: to merge Reality and Self, to come up with the third thing.” The godfather of New American Cinema and ostensible inventor of the diary film, Jonas Mekas has diligently worked for the past 60 years in service of American avant-garde film. "Since 1950 I have been keeping a film diary. I have been walking around with my Bolex and reacting to the immediate reality: situations, friends, New York, seasons of the year. On some days I shoot ten frames, on others ten seconds, still on others ten minutes. Or I shoot nothing....” From such moments comes the material for his film Walden, a chronological string of snapshots from the years 1964 to 1968 among the thriving arts scene of New York City and the familiar faces within it, from Stan Brakhage to Timothy Leary, and John and Yoko to Edie Sedgwick.  In Walden, a heightened spontaneity of camera movement and sense of edgy immediacy, which helped define New American Cinema, entwines with a simple diaristic approach, full of poetic reflections seeking to recover the past.

Jonas Mekas was born in 1922 in Semeniskiai, Lithuania but has been living and working in New York since 1949. In 1944, Jonas Mekas and his brother Adolfas were taken by the Nazis and imprisoned in a forced labor camp in Nazi Germany for eight months. After the War, he studied philosophy at the University of Mainz from 1946-48 and at the end of 1949 he emigrated with his brother to the U.S. settling in Williamsburg, Brooklyn. Two weeks after his arrival, he borrowed the money to buy his first Bolex 16mm camera and began to record moments of his life. He discovered avant-garde film at venues such as Amos Vogel's pioneering Cinema 16, and he began screening his own films in 1953. Mekas has been one of the leading figures of American avant-garde filmmaking or the "New American Cinema," as he dubbed it in the late '50s, playing various roles: in 1954, he became editor and chief of Film Culture; in 1958 he began writing his "Movie Journal" column for the Village Voice; in 1962 he co-founded the Film- Makers' Cooperative (FMC); and in 1964 the Filmmakers' Cinematheque which eventually grew into Anthology Film Archives, one of the world's largest and most impressive repositories of avant-garde films.