Underwritten by The Cooley Memorial Art Gallery’s Exhibit Jess: To and From the Printed Page 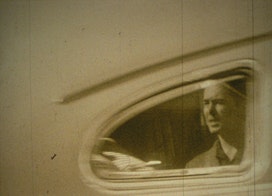 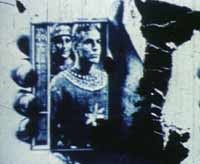 Jess [1923—2004], was an influential artist who emerged in the 1950s from within the literary context of Beat culture in San Francisco. Jess collaborated extensively with filmmakers, poets, artists, and writers of the time including his partner Robert Duncan, Michael McClure, Wallace Berman, and Harry Jacobus. Jess gradually evolved his own style of enigmatic figurative painting, making what he called "translations," lushly painted recomposed images borrowed from children's books and old science texts. This program brings together films that were either directly or indirectly inspired by Jess. The film In Between by Stan Brakhage, with music by John Cage, is a portrait Brakhage made of Jess, "a daydream nightmare in the surrealist tradition." Bay Area legend filmmaker Larry Jordan collaborated with Jess on The 40 and 1 Nights (or Jess' Didactic Nickelodeon) Jess performs 41 (now lost) collages to (his) selected sound bits in the manner of a turn-of-the-century nickelodeon. Jordan collaborated with poet Michael McClure on Visions of the City, a portrait of both McClure and San Francisco in 1957. Jane Conger Belson Shimane and her then husband Jordan Belson, were also deeply involved in the 1950s in San Francisco. Odds & Ends is a collage film combining paintings, out takes of travelogues, animation, live action Television, along with a tongue in cheek narration about jazz and poetry in the beat fashion. Odds & Ends is cut-out animation scored by Henry Jacobs. Christopher Maclaine, was active in the early beatnik scene of North Beach in the 1940s and 1950s, as one of the authentic characters at the very emergence of the beat movement on the West Coast. The Man Who Invented Gold is MacClaine's masterpiece about a madman's alchemical quest for gold, while Beat captures the existential angst and futility of bohemian life. Wallace Berman's film, Aleph, has been described by Brakhage as "the only true envisionment of the sixties I know."