In The Street: Outdoor Film Screening 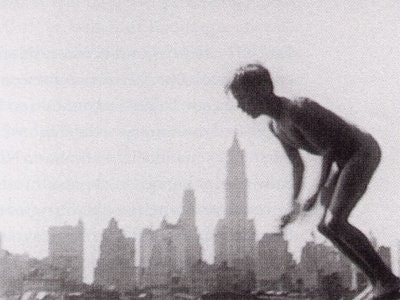 Once again, Cinema Project ventures out beneath the Portland stars with our film projector and screen with an eclectic program. Artist and filmmaker Rudy Burckhardt spent a lifetime capturing the world around him in an improvised, highly personal style. Among his most beautiful studies is this simple portrait of children swimming Under the Brooklyn Bridge. Noted New York City photographer Helen Levitt collaborated with Janice Loeb and James Agee on In the Street, capturing children at play on the streets of Manhattan's Upper East Side. Portland native and musicologist, painter, filmmaker, linguist, and anthropologist Harry Smith created Mirror Animation – a series of complexly intricate, hand-drawn collage animations. In his masterpiece The Riddle of Lumen by the prolific Stan Brakhage, the hero of the film is light itself. Finally concluding the night is The Black Tower by John Smith, we enter the world of a man haunted by a tower which, he believes, is following him around London.