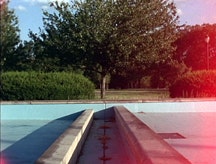 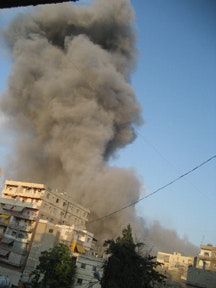 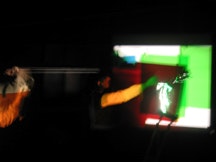 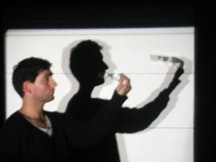 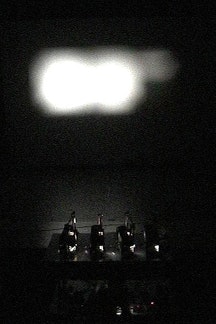 1:30pm - Artist Distribution Avenues and Choices: Why, Where, and How

Programmed and introduced by Irina Leimbacher
Six films, shot in the midst of and immediately after the war in Lebanon in 2006, incorporate diverse aesthetic strategies to forcefully articulate personal and collective experiences of war. Ranging from observational slices of life to cinematic iterations of the physical and psychic shock of massive destruction, from diaristic reflections to metaphorical allusions, these works embody the vital, multifaceted cinematic spirit thriving in Lebanon today. Irina Leimbacher will begin the program with a 20-minute talk on the emergence of new national and post-national sites of experimental media making, focusing on work from Lebanon and the Maghreb. To The Lebanese People by Ali Cherry [2006, dv, 2m]
Tank You by Ziad Antar [2006, dv, 12m]
July Trip by Waël Noureddine [2006, dv, 30m]
Merely A Smell by Maher Abi Samra [2007, dv, 10m]
Nights And Days by Lamia Joreige [2007, dv, 17m]
slippage by Ali Cherry [2007, dv, 12m]

Introduction reading by Thomas Beard from “Live Cinema: A Contemporary Reader”, published by San Francisco Cinematheque, this book brings together a wide range of writings and documents on the subject. Followed by projection performances by Andrew Lampert, Jeanne Liotta, and Bruce McClure.

Blank Pages For The Bio, Vol.I by Andrew Lampert
“I’m for a cinema composed not by the coupling of light and sound but from the combination of breakfast and lunch. Wait, isn’t that brunch? It used to be, but now lets pretend it’s something else. Theaters are diners; the griddle is a projector; cooks are projectionists; waiters, the concession crew; our food a moving image - here and gone. Who cares what it is anyways as long as it's filling? To get out the ketchup you've got to hit the bottom of the bottle. Featuring Dave Abramson, percussion." – A.L.

One Day This May No Longer Exist by Jeanne Liotta
“Lucretius has identified the substratum of everything that is with homogeneous atoms too small to be perceived. These atoms aggregate by chance to produce the visible world, and by chance they will eventually disperse, demolishing the cosmos as we know it. There are no permanent beings beneath, within, or above the heavens. There are no gods, and the universe manifests no final cause.– J.L.

XXX by Bruce McClure
A mechanical beauty, the movie projector can satisfy by the simultaneous graces of eye and ear. Between these organs the brain, held captive in a watery recess, shapes an inverted presentation. Analogous to our senses the projector is disjointed and for technical reasons its optical axis and its sound lens are separated by 26 film frames and this distance is nearly equal to that which separates the eye from the ear. Conventionally the optical sound line and the discreet film frame are shifted according to the projector's anatomy to bring the picture and sound in sync. Film, the canned despot dictates illusions that shackle the projector and the projectionist as accessories. In 'XXX' triple projection performances, the fetters are broken and the transposition of 26 frames is disregarded. The film sputters inchoately to the projector that then lays out a temporal ordering that the projectionist, together with the audience, is witness to. The patches of film emulsion and supportive base become a threshold to a scotopic stage show accompanied by psychotropic soundings. Between the swing of the shutter and the other leap of light onto a cathode, a space emerges trod by slow oxen turning furrowed plains. – B.M.