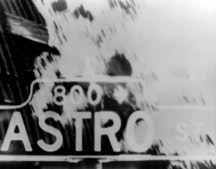 In 1994, when Rebecca Barten and David Sherman started showing experimental films in a tiny thirty-seat venue, crammed into the basement of their San Francisco apartment, they coined a new word to describe their self-made theater: micro-cinema. Now, that term has come to loosely describe the wide range of new spaces and venues that have emerged across North America in the decade and a half since Barten and Sherman1s venture. Small-scale, self-run and largely self-financed, this latest generation of exhibitors emerged at a time when the volume of artist-made film and video expanded more than ever before, and both production and exhibition blossomed in cities far beyond the traditional New York-San Francisco axis that had long defined avant-garde cinema. In this lecture, critic and curator Ed Halter charts the history of recent film and video exhibition in North America, focusing on the impact of the micro-cinema model, and peculating on where practices may now be heading.

Programmed and introduced by Scott Macdonald
By the early 1960s, Bruce Baillie and Chick Strand had begun informal screenings at an anarchist, mobile venue they were calling “Canyon Cinema”; soon, Canyon was publishing the Cinemanews, which by the end of the decade had become an international nexus for information about alternative media; and in 1966 Canyon became a distribution organization. For the past forty years Canyon Cinema has shown itself to be the most dependable alternative film distribution organization in this country. The filmmakers who were part of the emergence of Canyon Cinema and who made the organization a success also created a remarkable body of films that were widely influential and remain a considerable pleasure to experience and to think about. Chick Strand: Waterfall [1967, 16mm, color/so, 3m]
Gunvor Nelson: Take Off [1972, 16mm, b&w/so, 10m]
Anne Severson: Riverbody [1970, 16mm, b&w/so, 7m]
Gunvor Nelson: Kirsa Nicholina [1969, 16mm, color/so, 16m]
Gunvor Nelson: My Name Is Oona [1969, 16mm, b&w/so, 10m]
Chick Strand: Kristallnacht [1979, 16mm, b&w/so, 7m]
Abigail Child: Pacific Far East Line [1979, 16mm, color/si, 12m]