Smithson, Serra, & Holt—At the Drive In 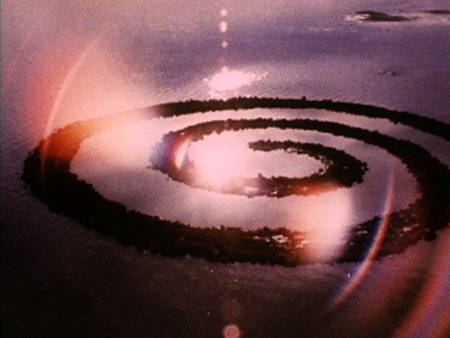 Cinema Project leaves the friendly confines of our gallery space, taking our projector and venturing out beneath the Portland stars. This one night only screening includes work by seminal artists Robert Smithson, Richard Serra, and Nancy Holt.  All three artists work share many similarities and are intertwined in many ways. Robert Smithson  and  Nancy Holt were briefly married and all three were close friends in the late 1960s/early 1970s. Robert Smithson and Nancy Holt were two pioneers of the movement of “earthworks” or  “earth art” in the late 1960s, where many artists became disillusioned with the commodification and insularity of gallery bound art. Smithson wrote many influential essays before he dying prematurely in 1973, but his Spiral Jetty project in the Great Salt Lake in Utah is his enduring legacy. In Spiral Jetty, Smithson documents this massive undertaking, weaving in sequences filmed in a natural history museum  featuring prehistoric relics, aerial footage of he Jetty, and voice over narration by Smithson. In Sun Tunnels, Nancy Holt takes a close look at the many different processes involved in making art in the American landscape, away from urban centers and outside the usual art-world confines of museums and galleries. More specifically, it is a personal record of the making the filmmaker's art work, Sun Tunnels, in the remote northwest Utah desert. Being aligned with the sunsets and sunrises during the summer and winter solstices, the sculpture indicates the daily and yearly cycle of the sun. Richard Serra, more internationially reknowned for his giant sculptures of steel, is also an accomplished film and video artist. Railroad Turnbridge studies the steel structure of a five-part early-20th-century railroad turnbridge as it slowly opens and closes and was shot in Portland, Oregon. For Serra, "the bridge enabled me to examine movement in filmic structure [and] the filming became a way of concentrating certain iconic elements of bridge structure."