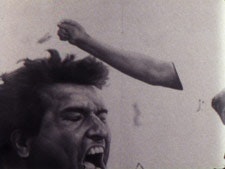 These two programs are offered as a tribute to Mark LaPore, one the greatest filmmakers of his generation, presented by his close friend curator Mark McElhatten The first program traces a linear chronology with three major works that followed after LaPore’s early period of super 8 work in the Sudan. The second evening is devoted to more subjective leaps across time periods to reveal hidden trajectories and echoes as the filmmaker returns to places and subject matter across the decades. Keenly aware of the limitations of individual knowledge these sensuous and formally severe films refuse to satisfy curiosity with information. They inform through experiential immersion, purposeful disorientation and striking juxtapositions of geographic dislocation and opposing sound and image.  LaPore fashioned works that were both deeply poetic and unflinchingly matter of fact. The variety of images across the films of quotidian labor, images of itinerant knife grinders and tightrope walkers, ceremonial elephants, tea harvesters, fish sellers, intersecting with images of suggestive repose; twilight figures locked in reverie and sleep or intercepted by death, heighten our attention to cyclical ebb and flow, the mystery of existence, and the filmmakers understated belief in a subjective cinema of consciousness.