Underwritten in part by Randy Rapaport 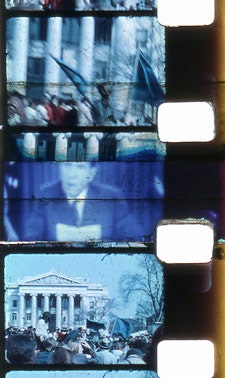 Cinema Project is honored to present two evenings with Bill Brand. For over three decades Bill Brand has been an artist, educator, activist and film preservationist. Starting with his film studies under Paul Sharits in the early 70s, he went on to found Chicago Filmmakers in 1973. Since 1976 Bill Brand has operated BB Optics, an optical printing service specializing in 8mm blow-ups and archival preservation particularly of films by artists.  In 1981 he completed a permanent public art project, Masstransiscope, a mural installed in the subway system of New York City that is animated by the movement of passing trains. Brand is currently Professor of Flim and Photography at Hampshire College and teaches film preservation in the graduate Moving Image Archiving and Preservation program at NYU. Bill will present a number of his own films as well as work that he has preserved. Bill Brand's own films begin with formal, structural studies, which  have lead to more personnel works that address personal and family history dealing with the implications of being the only sibling of five not to have inherited Polycystic Kidney Disease. Among the many remarkable films presented this two evenings is an extremely rare public presentation of The Nixon White House Staff Super 8 Motion Picture Film Collection, which contains FBI-confiscated films recorded between 1969 and 1973. The films were found in the office files of John Ehrlichman after he resigned his post as Assistant to the President for Domestic Affairs on April 30, 1973 and show Nixon and the First Family in a combination of banal and official scenarios.  Other great works include films by Saul Levine, Peter Herwitz, and Jack Waters. Bill Brand will also be presenting a workshop at the Northwest Film Center on April 14th! Please check www.nwfilm.org for more details.